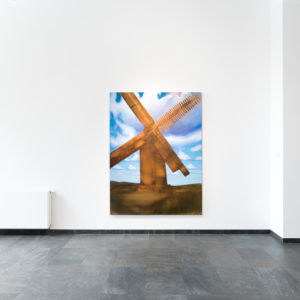 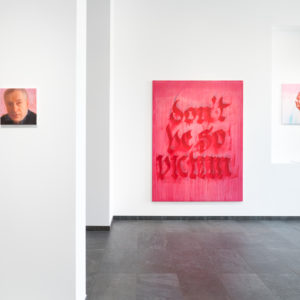 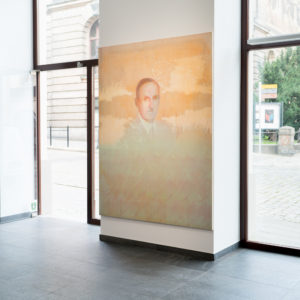 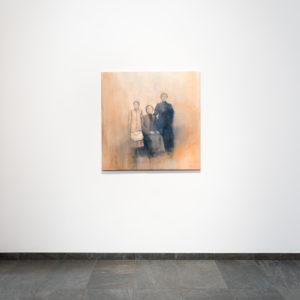 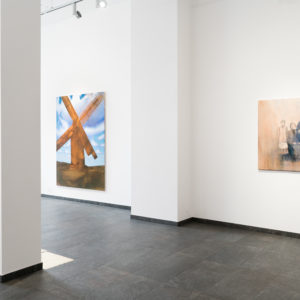 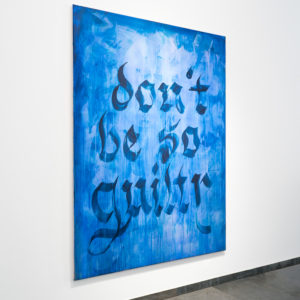 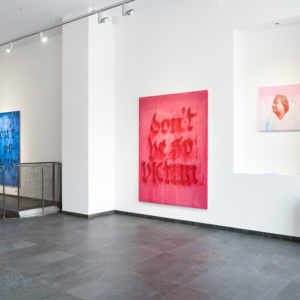 An Internal Dialogue: A Portrait of Polish-German Relations

Maciej Olekszy’s painting exhibition deals with the complex and delicate problem of Polish-German relations. The cycle of paintings is dominated by a series of faces and eyes of individuals whose identities have been formed where Polish and German nationalities meet one another, where these two identities are adjacent to or penetrate one another, and when the border between them has been abolished or violated.

In his works, Olekszy often lets Germans speak. A particularly well heard voice is that of Ekkehart Panek, the son of Polish migrants, with whom the artist has also exchanged letters:

My personal opinion about Poland: Poland is a country between Germany and Russia, this can be a Black Card or a Joker! Only few Polish people want to be the Joker, but many want to be victims.

(…) yes, the memory about this time is very different in Poland and in Germany.

For the last 70 years Germany paid a lot to all their neighbors. And paid a lot to the surviving Jewish people. And the German accepted to be the aggressors for ever.

In the area of individual experience, the influence of German postmemory does not give way to Polish postmemory and the German national identity turns out to be no less experienced. Surprisingly, the two attitudes are complementary: Poles do not have to compete with Germans for the position of the victim. In the artists’ letters, which Olekszy wrote at the same time as he created his paintings, two stereotypical and parallel-shaped attitudes are polarized: that of the aggressor (the wrong German) and that of the victim (the Pole). Although the artists’ delicacy does not allow them to generalize, their individual stories and personal experiences do not allow us to question these two figures.

Contemporary Poles tend to forget, however, that they did not witness the events in question. What creates their reaction to the trauma of concentration camps and the war is nothing but a series of images, which are becoming more and more mythologized with every generation. According to Marianne Hirsch, who has developed the term ‘postmemory’, it is associated with strong emotion and often falsified imagery. Ekkehart shares his observations with Olekszy not without a bit of bitterness. The division of roles is as much obvious to him as it is outdated and even unjust. How much longer will Germans have to seek forgiveness from their neighbour and the world? Both Poles and Germans fervently mythologize their less and less justifiable attitudes. The attitudes are adapted so easily that they hinder the necessary dialogue, ‘neutralize’ history (as Roland Barthes once put it) and infinitely distance us from facts.

Poles eagerly take the role of victims and they should not be in any way embarrassed by such statements. By doing so, they maintain the idea of messianism that remains close to their hearts. This allows them to reject everything that goes against schemas. In Polish schools they teach that anti-Semitism was bad and, as a consequence, Poles associate it par excellence with Nazism, and finally with Germans. Poles do not talk about how strong anti-Semitic sentiments were in Poland, about events such as the Kielce Pogrom (1946, so after the war), during which Poles murdered Jews, or about anti-Semitic demonstrations which continued to occur in Poland after the war (sic!). They do not mention the fact that they did not receive with open arms the small number of Shoah survivors (out of 3 million Jews of Polish descent). It is much more pleasing to see oneself as a victim and a saviour of the weak, who gave shelter, helped and supported those in need. Of course, many Poles did so. We should realize, however, that the problem is complex as it touched humanity as such rather than a single nation. Prominent twentieth-century thinkers see this problem as a turning point and a fall of not German, Polish or Jewish identities, but of humanism in general. The problem makes us wonder who we are and how far we can go. In 1971, Zimbardo conducted his famous prison experiment. The experiment was discontinued after six days due to the brutal developments that it triggered: those who had not previously shown sadistic predilections began to be too eager to pursue the role of the perpetrators. Therefore, we are under no illusions about the inclinations of human nature.

When thrown into the whirl of history, an individual seems to strive to quickly define themselves and the world, to adopt a certain attitude, to strike a pose and to make it a safe haven. When faced with the need to take the right attitude, our innate fear turns into panic, yields to impulses and negates a dialogue. When dealing with the subject of the banality of evil, Hannah Arendt was harshly criticized for negating the black and white division into victims and their torturers. At the present moment of our history, however, it seems that nothing should stop us from reflecting upon and taking control over what we take in unconsciously and what we create. Olekszy’s paintings are nothing but the development of the Polish-German dialogue that was undertaken by the two artists in the intimate space of their letters. In this context, the portrait (Fryderyk, Ekkehart Panek, Mr Panek…) is more than a single face captured on a canvas. Through the prism of an individual, Olekszy tries to capture the phenomenon on a macro scale, thus going beyond subjectivity and exposing general structures governing the Polish-German relations. The openness of the dialogue is manifested by him in two key messages: Don’t be so victim (A German to a Pole) and Don’t be so guilty (a Pole to a German). Are Poles able to give themselves time to verify their own attitudes? Can they turn to their (German) Other and look him in the face without any remorse or suspicion?
Maciej Olekszy’s exhibition in the Assembly gallery may encourage them to do this.