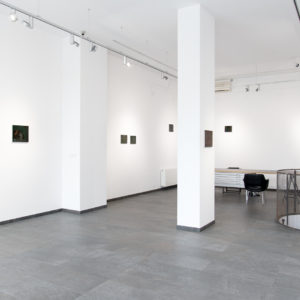 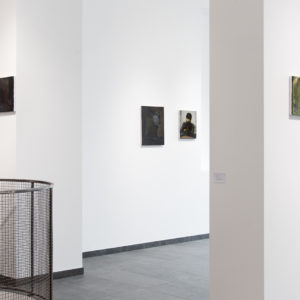 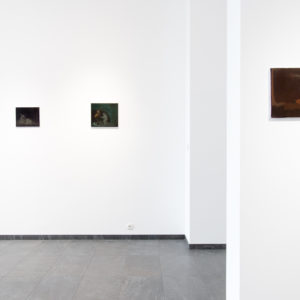 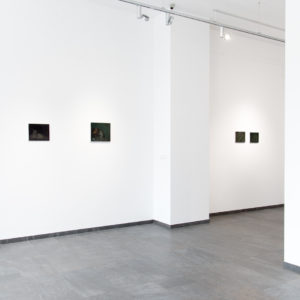 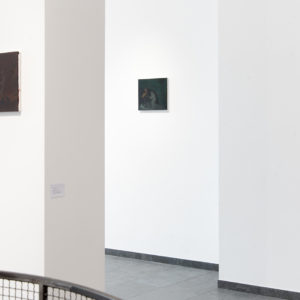 According a dictionary of film studies, ‘film noir’ (French for ‘black film’ or ‘dark film’) is a particular type of American thriller film that emerged in the 1940s and the first half of the 1950s. It contains elements of gangster films and crime stories, and frequently asks questions about male identity. It is also a ‘visual style’ that creates the impression of fear and anxiety. It expresses the deep pessimism of culture through special, contrasting lighting and shadows.1

The term ‘painting noir’ does not exist. After all, in the history of the genre, scenes located in the dark scenery are described by the terms ‘nocturne’ – scenes evocative of the night and ‘Stimmung’ – genre scenes painted by the Munich School artists, characterized by the predominance of brown and grey colours.2 However, it seems to be somehow justified to use the cinematic term to characterize the paintings of Piotr Kotlicki – a painter, the author of films, a graduate of the Academy of Fine Arts in Łódź and, since 2007, a lecturer at the Directing Department of the Łódź Film School.

His paintings are not overloaded with cinematographic effects. On the contrary, the painter consistently uses artistic means typical of painting. Contrary to painters who apply a mixture of means, thus smoothly crossing the boundaries between various art disciplines, Kotlicki emphasizes the more traditional identity of painting. He does so by patiently applying a glaze and brushwork and by dabbling in paint. Perhaps, his loyalty to painting is utopian as this art discipline has little effect on the transformation of collective imagination in the post-media era. The use of the cinematic term in relation to Kotlicki’s pictures is rather related to the psychological effect that his works exert on the audience. He presents disturbing scenes that destroy social harmony and suggest perversity, violence and even crimes. Painting provides him with the means to create compensatory structures rooted in rather gloomy social observation.3 However, Kotlicki’s moral standpoint is not clear. The artist involves his characters in unidentified, rather destructive events and develops vague, yet scary plots. His characters, mostly male, often have no facial features and wear specific outfit: t-shirts, tracksuits and sports shoes. They are neither completely anonymous perpetrators of action, nor precisely defined subculture representatives. Scenes created in the artist’s imagination – perhaps reflecting the social life in one of the Łódź blocks of flats in which the artist lives and works – portray certain aspects of the contemporary national crisis. By transforming them into paintings, the artist contributes to the discourse on the dark interior of the modern man: the emotions and tensions he experiences.

The theme of crisis is evident in Kotlicki’s understanding of the creative process. ‘In order for a painting to become the image I am waiting for,’ he says, ‘the act of creation must involve destruction. My goal is a shaky unity.’4 In order to achieve his goal, the artist gives up control and allows his unconsciousness and obsession to speak, thus preventing his images from becoming legible representations of the complex, conflicting and egalitarian subjectivity of the creator as a participant in social life. Adapting the features of the film genre to the artist’s paintings is also an anachronism and, at the same time, a modality that combines realities of different periods to show the vague faces of modern terror. As in Wojciech Smarzowski’s films, the artist comments on the behavioural dimension of existence in contemporary Poland. While the relative abstractness of Kotlicki’s paintings seems to transcend the pessimistic historical conditions in which they are created, it emphasizes the puppet passivity and commonplaceness of modern characters.
Ewelina Jarosz

³ An interesting research perspective assuming the coexistence of film noir and painting has been proposed by Michael Leja. See Idem, Reframing Abstract Expressionism. Subjectivity and Painting in the 1940s, New Haven and London: Yale University Press, 1993.

4 The quote comes from the materials about Piotr Kotlicki, provided by the curator, Katarzyna Kucharska.