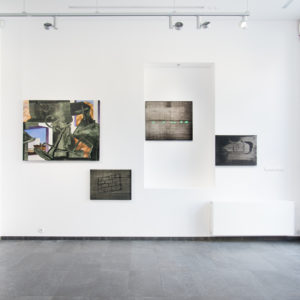 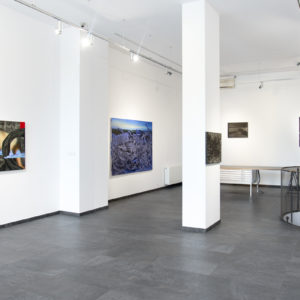 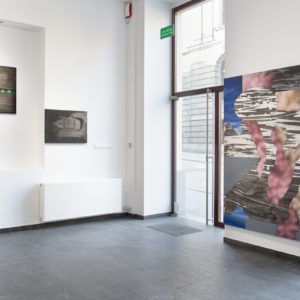 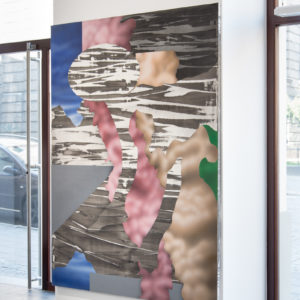 Mateusz Piestrak — Mobility of the imagination

In the new series of paintings titled Stream not found, Mateusz Piestrak develops his concept of „discovering” the image, which he started in Visabilities (2015-2016). Motives undertaken by the artist stay in constant motion, in the condition of indefinable ambiguity. Seemingly chaotic and random abstract forms conceal the well-thought-out composition, spread between the modernity and the tradition, and open to the viewer.

Piestrak includes figurative themes into his abstract world for the first time. He paraphrases fragments of artworks by the old masters, well known from the tradition of painting. Piestrak’s quotes sometimes are unequivocal – like Caravaggio’s Narcissus in the painting Stream. However, most often the quoted fragment, masked under the surface of many layers, is deformed and misshapen. The moment of the viewer’s final conclusion is suspended somewhere between (…), for example Hopper’s paintings and Pink Floyd’s songs (Goodbye blue sky). The artist chooses motives according to the non-obvious key, drawing inspiration alternately from everyday life, the tradition of painting and sculpture, achievements of contemporary artists, or juggling quotes taken from photographs. Analyzing the original as the reverse of the positive – Piestrak formulates his artistic statement, which reminds rather an ironic protest than a plan for the future (Make painting great again). Variety of the black negative paintings repeated on the exhibition, as well as other intriguing, absurd repetitions, are similar to those we encounter in life: something happens again and again and again. The artist seems to notice that history has taught us nothing, everything (again) is repeated.

Image considerations from the series Stream not found stay in constant motion and evade from unambiguous interpretation. Piestrak doesn’t begin his work from thinking in terms of narration – he rather strives for this construction to appear at the audience, letting the images stimulate the viewers’ memory and make them start building the story themselves. The artist drifts through his own epoch, turning the source of inspiration into fiction. By multiplying parallel perspectives, the narration in his works is always multidimensional, fragmentary, foggy and depends strongly on the individual experience. There is nothing passive in the act of looking at the Piestrak’s hybrids. Facing images from the Stream not found series, requires an approach that, as Georges Didi-Huberman puts it „[…] a gaze that would not draw close only to discern and recognize, to name what it grasps at any cost – but would, first, distance itself a bit and abstain from clarifying everything immediately. Something like a suspended attention, a prolonged suspension of the moment of reaching conclusions, where interpretation would have time to deploy itself in several dimensions, between the grasped visible and the lived ordeal of a relinquishment”¹.