Non-places – a hypothesis of the whole

Reality imitates nature without being a mere mirror to it, and in the detail (ex ungue leonem, as Vasari put it, ‘you may tell the lion by his claws’), it reproduces the Beauty of the whole. This ennoblement of the simulacrum would not have been possible without some decisive progress in pictorial and architectonic techniques: the perfection of perspectival representation on Brunelleschi’s part and the spread of oil painting in Flanders. … reality is reproduced with precision, but at the same time in accordance with the subjective point of view of the observer, who in a certain sense ‘adds’ to the exactitude of the object the Beauty contemplated by the beholder. 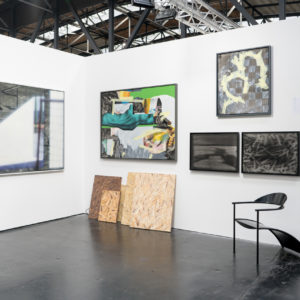 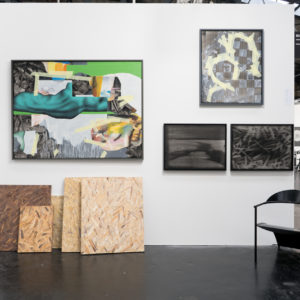 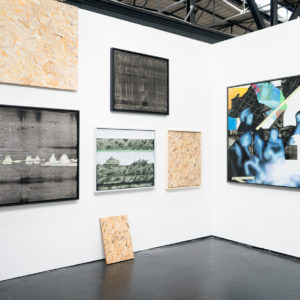 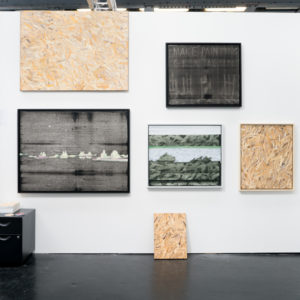 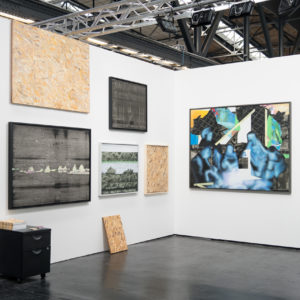 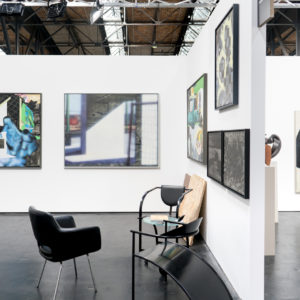 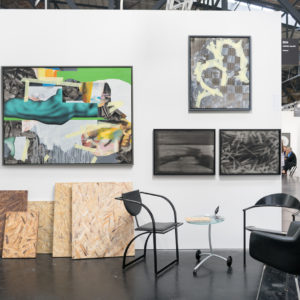 When we look at the paintings by Mateusz Piestrak, a young Polish artist from Poznań, we firmly believe that painting is not only a way to establish subjective reality, but it is also, if not primarily, a kind of mirror in which the contemporary world is reflected. What does this world look like in Piestrak’s vision? His canvas are filled with non-uniform shapes. He creates them using various techniques, such as acrylic brush strokes, rubber squeegee strokes, pouring paint directly onto painting supports and the use of paper tape or collage which refer to software aesthetics. These shapes form a kind of colourful, often interpenetrating subregions. They are most often ‘blurred’, amorphous and oblong forms. There are also figurative representations (or rather their traces or remnants), realistic outlines and negatives. Sharp structures creating passages are right next to them (or between them). In some paintings, strokes made with a painting tool imitate the act of erasing. Familiar objects, shapes and inscriptions are emerging from the dark background. Sometimes we have the impression that they are merely a reminiscence of the once-used meta-art alphabet – a kind of universal language functioning beyond time and space that was used for the purposes of inter-personal dialogue.

These subregions – supported by imaging borrowed from photo processing techniques (the blur effect, transparency and highlighting the background layer without the alpha channel) – dissolve in the beholder’s eyes. They point to the reversibility, fragmentation and contingency of all relationships which are, however, complementary. Their complementary nature is strange and unusual. It becomes a kind of rheological (from the Greek rhéos – a flow) deformation in which the Heraklitean ‘panta rhei’ echoes. It is therefore liquid and unstable like the postmodern society in which the artist himself grew up. Zygmunt Bauman wrote that in this liquid, modern setting, ‘[n]o “beds” are furnished for “re-embedding”, and such beds as might be postulated and pursued prove fragile and often vanish before the work of “re-embedding” is complete.’

The deformities on the artist’s canvas blur the boundaries between figurativeness and abstraction, and the semiotic distinction into a sign and its meaning. These treatments highlight the ephemeral and repetitive elements of the phenomena captured. These elements evoke inspiration by asking questions – in the midst of an aesthetic impression – about new ways of reaching the present recipient of art. However, the way in which individual representations are composed reveals something more, some added value. It is an attempt at entering the very important discourse on the categories of the Other and Self-Identity. It contains a paradoxical, because unsatisfiable, desire to be absolutely free (e.g. to be outside a relationship with another person). This fact raises frustration and evokes a sense of alienation, leading eventually to loneliness. It seems that having realized that certain mechanisms are similar, Piestrak does not adopt an unequivocal attitude to the old order. His artistic activity is a search, a kind of replica of the outside world, which blurs in the multitude of similar stimuli and meanings. Hence, the communication code is shifted towards ‘sites denied’ by the painting, ‘erased’ or ‘cut out’ of the painting sequence. Once they seem to be within reach of our understanding, they change their position by surrendering to the waving rhythm of the painting support. They transform into plastic images of liquid reality. Although Baudrillard’s simulacra can be easily tranced in Piestrak’s deformations, they simultaneously become ‘transit areas’. Fragments of masterpieces (e.g. by Hopper or Pink Floyd’s song ‘Goodbye blue sky’) are somewhere ‘between’ the multi-layered surface of the paintings and the viewer’s eye. These citations, however, lose their temporal relationships in which they were created and their identity. These are replaced by the loneliness of the context and the simulacrum of the original.

Mateusz Piestrak presents a kind of quasi places and quasi things. On the one hand, they relate to something familiar; on the other hand, they are a product of new times and the associated aesthetics. His non-places lead to transcendental experience, becoming manifestations of existence in depersonalized supermodernity, as Marc Augé refers to the modern world. According to Augé, a prominent French anthropologist and ethnologist, similar spaces (including motorway routes, junctions, airports, means of transport, retail outlets and refugee camps) are devoid of their specific features. These are areas that cannot be defined from an identity, relational or historical point of view. They are ‘nobody’s’ places. At the same time, being a common good, they belong to everyone. However, since no community is emotionally bound to them, they create merely a contractual rather than community sphere. Such spaces are devoid of cultural reference points. All that is close, homely, valuable is suppressed by cold unification. Man in non-places is left alone, sentenced to solitary interpretation and selection of excessive numbers of messages. Deep relations are blurred. A contact with the Other is strictly limited to the absolute minimum. There is only movement, transit – without reflection, without roots. ‘All consumers of space are thus imprisoned in some kind of cosmology.’

Behind the anonymity of people and places is forgetting – the worst form of non-memory that brings the real threat of loneliness. Mateusz Piestrak’s paintings extend the anthropological significance of Augé’s non-places to make us realize how many such areas exist in our cultural consciousness.

Piestrak’s quasi places/things often reconstruct the aura of historical time through painting metonymies. Surrounded by abstract shapes, they refer to the works of old masters, such as Caravaggio, Holbein and Velázquez. Every time, however, we deal with an exemplification of what happens ‘after’… It is a vision of shreds of references stripped of their past meanings and suspended somewhere between time and space. The Laocoön Group is emerging from the cracked colours on one of the canvas. The photographic ‘blur’ smooths the outlines of white marble. We do not have the slightest doubt that this sculpture, presented by the artist in the state of decomposition, has become the inspiration for the painting. Its sinister title ‘Game Over’ announces the inevitable end. Is it another prophecy of the end of academic patterns or art as such? Or perhaps it is a simple game, the penetration of structures, amorphous silhouettes, colours and small flares – a youthful play with art? By repeating the classic formula, the artist is freeing himself from the past in order to find his identity. Nietzsche’s rejection of history seems to be glowing over Piestrak’s world. This rejection has become the foundation of ‘postmodernity’. The German philosopher once wrote:

Excess of history has attacked life’s plastic powers, it no longer knows how to employ the past as a nourishing food. The evil is dreadful, and yet! if youth did not possess nature’s clairvoyant gift, no one would know it is an evil or that a paradise of health has been lost. This same youth, however, also divines with the curative instinct of this same nature how this paradise is to be regained; it knows the medicine and balsam against the malady of history, against excess of history: but what is this medicine called? … [T]he unhistorical and the suprahistorical… With the word ‘the unhistorical’ I designate the art and power of forgetting and of enclosing oneself within a bounded horizon; I call ‘suprahistorical’ the powers which lead the eye away from becoming towards that which bestows upon existence the character of the eternal and stable, towards art…

In Nietzsche’s view, this kind of forgetting – unlike Augé’s understanding – is devoid of pejorative overtone; it is rather a kind of auto-creation that allows for a proper recognition of the present. Without forgetting, we would still be in the wrong axiological structures. Owing to the historical sense that blends the past and the present, we become semi-barbarians. We need to develop creative relationships with history, change the mode, create a distance and write a living history. By cutting off the roots (as a way of thinking about the world) and thus following ‘the unhistorical’ and ‘the suprahistorical’, the artist tries to see what is emerging on the horizon; what is arising in the historical ‘just before’… Piestrak’s paintings prove that the ‘new’ is always born on the ruins of the old. It contains a particle of the past and an outline of the process of continuous becoming. This artist proves to have the creative ability to look at the reality that surrounds him. Forms of continuous motion, flow and the accumulation of time and meanings become the basis for the creation of unique worlds through which the artist tells stories in his own way.